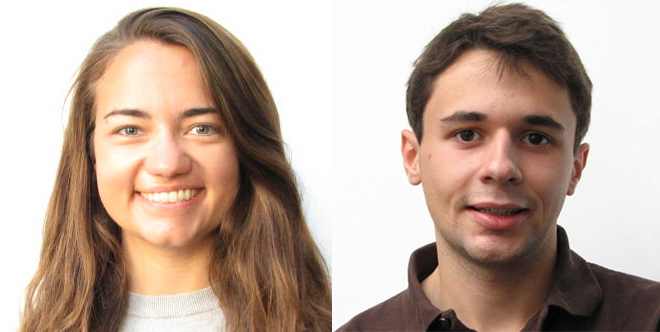 We are pleased to announce that the 2021-2022 Amelia Peabody Scholarship has been awarded jointly to Amanda O’Brien and Blaise Robert, G2 and G4 students, respectively, in the Harvard Speech and Hearing Bioscience and Technology (SHBT) Program.

Amanda is beginning her doctoral research under the joint supervision of Dr. John Gabrieli and Dr. Pawan Sinha in the Department of Brain and Cognitive Science at MIT. Her project aims at understanding the neural basis for the major heterogeneity in language skills observed among those diagnosed with Autism Spectrum Disorder (ASD). She is asking whether there is greater heterogeneity in patterns of brain responses in ASD, and whether that heterogeneity is greater depending on the level of speech and language complexity. Amanda is aiming for a new precision of individualized brain and behavior analysis of language in autism that integrates methods across four laboratories with expertise in neuroimaging (Gabrieli), perception (Sinha), individual language brain mapping (Fedorenko), and psycholinguistics (Shattuck-Hufnagel). Despite being enrolled in SHBT for only two years, including two-thirds during the COVID pandemic, Amanda has made remarkable progress in her research. She presented a poster of her work in the Gabrieli lab at the International Society of Autism Research Conference held virtually in May 2021. At the same time, with Pawan Sinha, she designed and executed an on-line experiment to understand the effect of linguistic prediction on categorical perception in individuals with and without ASD. She also published a systematic review of prediction in ASD in Autism Research, the flagship journal of the International Society for Autism Research.

Blaise is doing research with Dr. Daniel Polley in the Department of Otolaryngology, Head and Neck Surgery at MEE. He has recently completed a technically challenging project aimed at characterizing the functional topography of cholinergic neurons in the basal forebrain, which play a key role in regulating cortical plasticity and auditory learning. Blaise applied innovative, fiber-based fluorescence imaging techniques using optical apparatus he largely built himself. He showed that, contrary to textbook views of cholinergic neurons as a homogeneous group, there are systematic regional differences within the basal forebrain in how cholinergic neurons regulate perceptual salience, brain states, and behavioral reinforcement. These findings, which were reported in two publications, will have a major impact on the design of future studies of cholinergic modulation on sensory perception and learning. Now, Blaise is embarking on a new project in which he applies the understanding of cholinergic modulation gained from studies in animal models to alleviate tinnitus and hyperacusis in humans. He aims to induce durable changes in the neural coding of sounds by creating the conditions for dampened sound responses during the windows of cortical plasticity opened by surges of acetylcholine. His goal is to identify combinations of sensory stimuli and movement that promote dampened activity in the auditory cortex and thereby alleviate tinnitus.